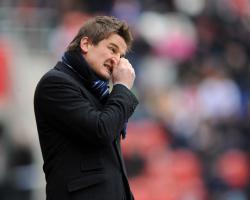 AFC Wimbledon 1-0 Dag & Red: Match Report - view commentary, squad, and statistics of the game as it happened.Fuller end's eight-year droughtBarry Fuller's first goal in eight years earned AFC Wimbledon a first win in seven games with a 1-0 victory against Dagenham & Redbridge.The home side almost took the lead inside four minutes as Dannie Bulman's low volley took a sizeable deflection and ran inches past visiting goalkeeper Mark Cousins' post.Fuller opened the scoring for the Dons in the 19th minute with his long-awaited strike

George Francomb's corner was met by Adam Barrett, who knocked down for Fuller to tap in from six yards.Matt Tubbs should have put an end to his six-game goalless run in the 58th minute when he was played in by the impressive Fuller.The Daggers could have levelled twice, first through Jamie Cureton, who fluffed his effort with only James Shea to beat, and seconds later Abu Ogogo, played in Ashley Chambers, who fired wildly across goal.Bulman could have settled it for the home side, but sliced wide in the dying minutes.But Wimbledon held on to pile the misery on struggling Dagenham and record their first clean sheet since Plymouth's visit last month