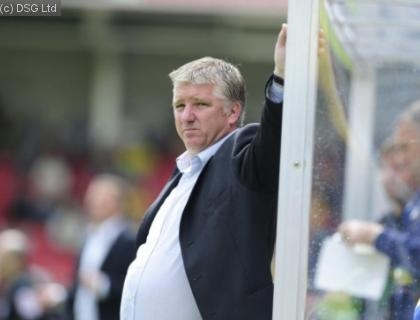 Gavin Tomlin scored a second double in as many games for Southend as they produced a great away performance to beat AFC Wimbledon 4-0.

Kevan Hurst pulled the strings for the visitors, playing Tomlin through two minutes before half-time to lash home, before delivering the corner from which Ryan Cresswell made it 2-0 just after the hour mark.

Tomlin grabbed his second of the evening from Hurst's free-kick after 67 minutes before Barry Corr's late finish sealed the win and extended Southend's unbeaten run to six games.

AFC Wimbledon almost went ahead in the sixth minute when Jake Reeves' 25-yard effort clipped the crossbar on its way over.

But in the 43rd minute, despite the hosts creating more chances, Tomlin raced onto Hurst's ball and smashed a shot into the bottom left-hand corner of the net beyond veteran goalkeeper Neil Sullivan.

After 61 minutes Cresswell made it 2-0, powering home a header at the back post, and six minutes later Tomlin met Hurst's free-kick to head home his second goal.

Two minutes from time Corr hammered home another from close range after another Hurst corner to secure a second memorable away win in as many games for Southend having beaten Torquay 4-1 on Saturday.