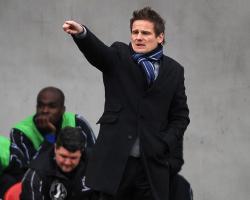 Monday will be a special occasion for everybody associated with the Dons, who are in the FA Cup third round for the first time since their rebirth in 2002.

Player trials on Wimbledon Common and Combined Counties League football seems an awful long time ago now, though, with the club chasing promotion from League Two and readying themselves for a mouth-watering clash with Liverpool.

The Kingsmeadow encounter brings with it memories of the most famous day in Wimbledon's history, when the Crazy Gang shocked the Merseyside behemoths to win the FA Cup.

Lawrie Sanchez scored the decisive goal at Wembley that day, although captain Beasant's save from a John Aldridge penalty remains the iconic image - one current Wimbledon goalkeeper Shea admits he has yet to see.

"I haven't seen the save but I've heard it is unbelievable," he told Press Association Sport.

"I remember (former AFC Wimbledon manager) Dave Anderson telling me about it when I was about to join.

"He talked me through the whole history of the club and everything, but I haven't had the chance to see it yet.

"I've been meaning to see the Crazy Gang documentary as well, but I don't have BT Sport

My old man has recorded it for me so I've got to go around his and watch it.

"I've seen (other) videos, I've seen the goal and inside the stadium there are pictures everywhere.

"It was a great day for them

They weren't expected to win and hopefully we can replicate what they done."

Dons manager Neal Ardley will be able to call on defenders Adam Barrett and Jake Goodman, whose loan spells expire after Monday's tie.

Vice-captain Barry Fuller is in contention after a hamstring tweak, while midfielder Sammy Moore has overcome illness.

Liverpool captain Steven Gerrard may only have a limited number of matches remaining for his boyhood club but that will not affect manager Brendan Rodgers' team selections.

The 34-year-old midfielder, who will leave in the summer when his contract expires, is likely to be on the bench for Monday's tie against AFC Wimbledon.

But while Gerrard will want to make the most of the time he has left it will not sway Rodgers, who has used Gerrard judiciously this season in an attempt to get the best out of him.

"I will always pick what I think is the best team for the games," he said.

"Every player is the same, wanting to play every game, but it hasn't changed.

"He understands where it's at and because the number of games we have been playing there might be times he has to come out of the team."

Fellow centre-back Dejan Lovren could make his first appearance since December 17 after recovering from a groin injury.

Gerrard is likely to be rested while striker Mario Balotelli needs to be assessed after missing Thursday's draw with Leicester through injury.