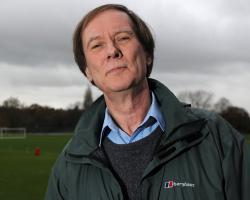 The League Two side threatened an upset akin to the 1988 FA Cup final on Monday, with Adebayo Akinfenwa deservedly cancelling out Steven Gerrard's early penalty.

Wimbledon even had chances to pull ahead at Kingsmeadow, only for the Liverpool captain to extinguish hopes of an upset by curling home a free-kick to secure a 2-1 win, leaving chief executive Samuelson surprisingly disappointed.

"What I didn't think would happen at the end is that I would come off thinking that I was really disappointed that we didn't get the result that I felt we deserved," he told Press Association Sport

"There is everything to be proud about and it was such a good display that, to my surprise, I am disappointed."

It is pride that is the overriding emotion, though, after the Dons' first third-round tie since they were reformed in 2002.

In that time, the club have risen from the Combined Counties League to become League Two promotion hopefuls, with their desire to progress highlighted by a planning application to return to their spiritual home in Merton.

AFC Wimbledon are seeking to build a 20,000-seater stadium with an initial capacity of 11,000 to continue the club's growth - something Samuelson is confident of after the Liverpool match.

"I am massively proud," he said

"I think what it shows is that there is fantastic support for the club.

"There is an infrastructure here capable of being built on and moving to a new stadium with bigger crowds, a better team and even more to invest in players.

"The future looks pretty bright to me."