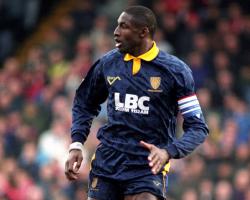 According to reports in Saturday's edition of the Daily Mail, in the film former Wimbledon midfielder and now Hollywood actor Vinnie Jones described an horrendous attack by Fashanu on another Dons player

The programme has been criticised by former Wimbledon owner Sam Hammam, who believes it wrongly depicts the club's players as thugs, but Fashanu has no regrets about how he conducted himself on and off the field

"Fash was a physical b***** and you would either have to adapt or dissolve as a person,' Fashanu told the Mail on Sunday

"The players ran the club and if you were a wise manager, you would work with us, not against us."

As a senior member of the squad having joined from Millwall in 1986, Fashanu was one of a few players charged with enforcing player discipline and he revealed their methods went further than merely imposing a fine.

"The Wimbledon players didn't have money at that stage, we couldn't fine you, so the best we could do is beat the c**p out of you," he said.

"That is how we got our success

We are not here to apologise, we are here to tell you how it worked.

"Once, one of our lads wouldn't pay a fine, Vinnie and Wisey (Dennis Wise) went to get him, I locked the door of the changing-room and when the door is locked, it is only me, him and God who knows what's happened

But I assure you, you come out looking different than when you went in.

"People will now go, 'Well, that was too much intimidation'

I'm sorry, in the world we were living in then, it was part of the qualities of leadership, intimidation."

Fashanu went on to say he believes the physical aspect of football has disappeared from the game.

He added: "On the pitch, we've definitely gone soft

It's got to the extent where there is no physical play