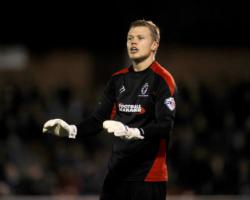 
Kennedy out for Dons

Callum Kennedy has been added to AFC Wimbledon's casualty list ahead of the visit of Hartlepool.


Kennedy rolled his ankle just half an hour into Saturday's 2-1 win over Exeter, so fellow full-back Jim Fenlon's return from a three-match ban is timely and he is set to step in.


Centre-half Andy Frampton remains sidelined after dislocating his shoulder and midfielder Peter Sweeney is out with a broken bone in his foot.


Winger Kevin Sainte-Luce is pushing for a start after impressing as a substitute against the Grecians.


Attacking midfielder Barmby, son of former England international Nick, signed on loan from Manchester United last week and stepped off the substitutes' bench to score a fine goal in the weekend win over York.


Cooper will be without striker James Poole, who will miss his third game due to a hamstring injury, while defender Jordan Richards serves the second game of a three-match ban following his recent dismissal at Fleetwood.