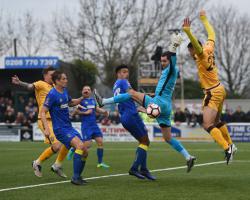 Two famous names of FA Cups past will be in the fourth-round draw, but the League One Dons can count themselves fortunate after surviving a scare against their National League neighbours

The old Wimbledon were of course winners in 1988 when they shocked mighty Liverpool, while on this very day in 1989 Sutton knocked out the previous season's holders, Coventry.

The Dons were back to where it all began as well, having played their first official match since forming in 2002 at Sutton's Gander Green Lane ground

Boss Neal Ardley had voiced his concerns about playing on Sutton's 3G pitch before the match, and his fears were not misplaced as the hosts bossed most of the match.

After just six minutes former Arsenal trainee Roarie Deacon slipped Matt Tubbs in behind the Dons defence but the ex-Portsmouth striker fired across goal and wide.

And the Dons had a lucky escape after half an hour when Maxime Biamou raced onto Deacon's through-ball and beat Shea only to see his effort clip the crossbar.

But Wimbledon had their chances in the first half too, with Ly le Taylor shooting wide and Dannie Bulman firing straight at former Dons keeper Ross Worner