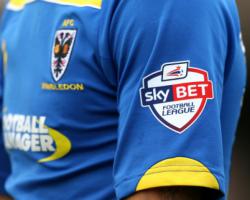 football.co.uk/match_reports/afc_wimbledon_torquay_3632041-9.shtml">AFC Wimbledon 0-2 Torquay: Match Report - view commentary, squad, and statistics of the game as it happened.

Chris Hargreaves made the perfect start to his tenure as Torquay manager by guiding the Gulls to a 2-0 victory at AFC Wimbledon.


The visitors took the lead after 29 minutes through Krystian Pearce and doubled their advantage before the break when on-loan striker Jayden Stockley scored two minutes before half-time.


George Francomb and Charlie Wyke both went close for the Dons in the second half but Hargreaves' team held on for a first win in five games.


Having been on the back foot for most of the first half, Torquay took the lead minute through defender Pearce.


Will Antwi then scuffed a clearance which fell to the Gulls' new signing Stockley, who drew an excellent save from Ross Worner but Pearce pounced on the rebound.


Stockley doubled the lead after 43 minutes, rising above Antwi and guiding his header past Worner's outstretched hand.


Wimbledon built periods of sustained pressure in the second half with substitute Kevin Sainte-Luce causing Torquay problems down the right, but when his cross found Wyke the loanee could only head over the bar.


Francomb looked to have pulled one back for the Dons when his shot beat goalkeeper Michael Poke but it did not beat Aaron Downes, who flew across to block the ball on the line.